This entry is part of the “Spoiled By Supplements” blog series.

Every story has a beginning, middle, and end.

Stories are carefully crafted illusions that are supposed to make sense in a way that life does not. Most of the time it’s a simple matter of picking up the book, popping in the DVD, or opening up the comic to start the story. You follow it all the way through to the end, and you’re done (at least until the sequel comes out). However, there are some stories and mediums where the lines are blurred and the entry point for the story is not nearly as obvious. The prime example I can think of is comics.

I’m still pretty new to the world of comics and graphic novels, and they can be really hard to get into. I remember after watching the Marvel film Doctor Strange, I wanted to learn more about the character. But when I went to look up the comics, I immediately faced a major problem: where should I start?

Many comic book characters from Marvel and DC have had stories running for literally decades. There are crossovers, reboots, alternate realities, dream sequences, mash-ups, character mergers, and hiatuses. Where was I supposed to start with this? Do I go back to the very beginning with Steve Ditko‘s creation of Doctor Strange in 1963? Do I read only the ones done by him or try iterations by other artists? Do I start with newer comic runs like Aaron Bachalo’s Doctor Strange (2015-2018)? Or should I start with the stand-alone series Doctor Strange: The Oath? How do I differentiate between different runs of comics if they have the same or very similar names? (And don’t even get me started on the weird numbering systems, strange titles for trade paperbacks, and the near-constant reboots that lead to multiple beginnings! For example, Star Wars Issue #1 started by Jason Aaron is not the same as the Star Wars Issue #1 released in January 2020 under Charles Soule. Star Wars: Darth Vader is not the same series as Darth Vader: Dark Lord of the Sith.) Plus, do you read things in publishing order or in the story’s internal chronological order? What about the New 52 run in DC comics? Do those count? Is there a certain order in which they should be read? Are the characters even the same characters? What even is the difference between a “soft” and “hard” reboot, and why do they come about? Just for the purpose of writing this blog entry, I have more than ten tabs open in my web browser looking up things to make sure what I’m mentioning here is accurate!

There’s a similar (but slightly less intimidating) problem with the Marvel Cinematic Universe (MCU.) Early on, you didn’t need to watch every single movie in order to understand what was going on. But if you didn’t watch all of the previous movies before watching Marvel’s The Avengers, you were going to be seriously at a loss as to what was going on, who the characters were, why they behave like they do, and why you should care. It only gets worse and more involved the further along you go until you reach a point where you have to watch over a dozen movies in order to understand the latest release in the MCU. There are still stand alone films introducing individual characters, but even they are starting to have trouble standing without any reference to previous films. On the one hand, it’s an impressive feat, making what is essentially a superhero television show with episodes that are 2 hours long and come out years apart. On the other hand, it can be hard for new fans to break in because they may not feel like watching all of those previous movies, especially if they don’t care about certain characters or the movies themselves aren’t especially compelling. (I’m looking at you, Dark World.) And the level of complexity increases exponentially when you start including the various spin-off television shows like Agents of S.H.I.E.L.D. or Jessica Jones, which overlap with the films and can spoil key moments, plot points, or reveals for other parts of the story. 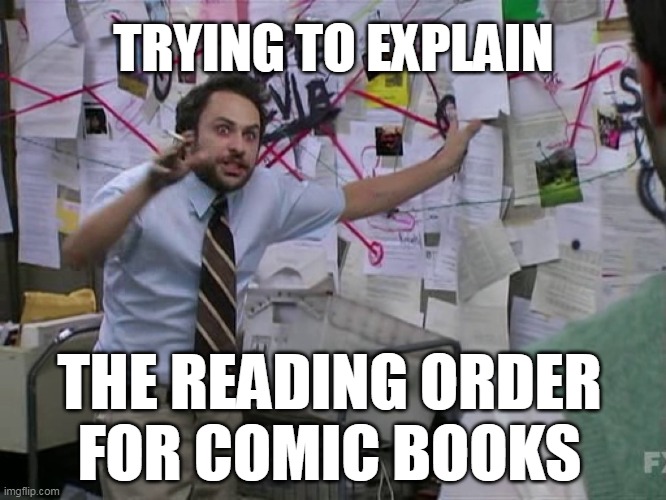 As you can see, there is a lot to process. And it’s one of the reasons I didn’t get into comics for so long, because I had no idea where to start in order to have a firm understanding of the plot and characters. (Not to mention I’m a completionist and like reading things in chronological order.) Some things are more or less stand alone, but others hinge on or reference previous events in other issues that I might not have read, which could have a major impact on my understanding of and response to the story. With so much accumulated material to sort through, it’s no wonder that some people just never bother. And that’s a shame because there are a lot of good stories and arcs that might get overlooked if you’re just starting out, are a more casual fan, or are just too busy with life to spend hours figuring out where to begin.

Now, I know that part of this is just because these stories and characters have been running for a long time with different creative oversight. So many have left the nest of origin and gone on to morph through different creative lenses. And some stories never expected to last this long or gather such a dedicated following, so they never bothered to worry about internal consistency or chronology. (I’m looking at you, Doctor Who.)

There is nothing wrong with any of this. It can be an interesting experiment and leads to some excellent shades of storytelling. And no one can predict whether their imaginary world will garner a cult following. I just wish that all of it was a little better cataloged. That there was a way to quickly and easily identify entrance points into the story. Sometimes you have to rely on the folks at your local comic store or friends who are a little more savvy with the story. There are, of course, many different wikias and fan sites that can offer advice. (But reader beware; these can contain lots of spoilers!)

Now and then, you do get a natural break, like when Doctor Who restarted with the 9th Doctor in 2005. The show had been on hiatus since 1989 (minus a brief attempt at revival in 1996 with the American-made TV movie). The great thing about the 2005 Doctor Who is that you didn’t need to know anything about the previous seasons in order to understand what was happening or who the Doctor was. Obviously the experience would be enhanced with that background knowledge, but it wasn’t a prerequisite. Unfortunately, this kind of break is rare, so I have some suggestions to keep in mind for the future.

To publishers and marketers: please, make things simpler to follow. Make timelines or eras or Issue # of X Run clear and easy to understand. To individual creatives: try to make stand alone arcs, stand alone stories, or clear indicators of what should be read or watched first, especially when you have crossovers. Try to work in natural breaks in the story via time-jumps or other clearly-designated pauses. Maybe include something like a short intro recap like TV series do, which can be skipped by those familiar with the series, but are invaluable to those who have been away for a while or are just starting the journey. Or, if you’re really good, integrate necessary information into the narrative as you go. (Babylon 5 by J. Michael Straczynski is fabulous at this; learn from the master!)

To readers and viewers: don’t forget that you can start and stop where you like. This is something I have to tell myself all the time. I have to fight the urge to “read all the things” or “watch all the things.” There are a million Marvel characters, but I only seek out the stories that focus on Doctor Strange or Loki. Yes, I’m missing a ton of other stories, but these are the characters I like the most, so those are the ones I’ll read. Star Wars has a series that focuses on Doctor Aphra, an amoral archaeologist/treasure hunter, who I honestly don’t care much for, so I don’t read those comics.

And that is okay.

The point, after all, is to enjoy yourself and get lost in a good story. If there is no door, then it’s time to make one for yourself.