Another film review from the Penn-Mar Literary Critics! Many thanks to Avellina for joining me on this venture into Arthurian legend.

Be advised that this entry contains spoilers! 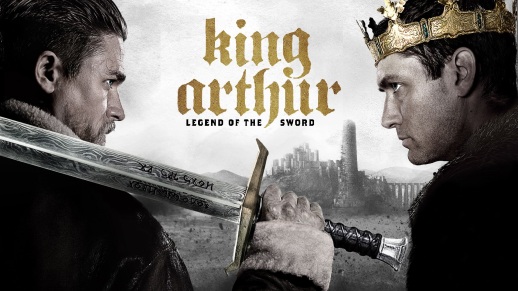 I will not pretend that King Arthur: Legend of the Sword was a good movie. It was average at best, mediocre at worst. It managed to be better than Beowulf or Dracula Untold but did not reach the level of Lord of the Rings or Game of Thrones. And yet, to my surprise, I rather enjoyed it.

King Arthur is a popcorn film, a Pacific Rim in the fantasy genre. It focuses on CGI action and glib character moments rather than the deeper tales of good and evil. It has the look of such epic films in many respects, (the production values are quite good) but lacks something vital that keeps it from true greatness. Well, actually, it lacks a lot of things. It’s filled with internal inconsistencies, plot holes the size of Miami, a magic system with no real rules, an over-emphasis on action that looks good rather than what makes sense, gratuitous CGI, inability to really distinguish between characters (especially the women), and a tragic, almost criminal under-use of Jude Law.

Seriously. Jude Law made a fantastic Vortigern, a man who usurps his brother’s throne by the most vicious means possible, and yet still managed to engage my sympathy. What boggled my mind was that Vortigern sacrificed his wife, and eventually his daughter, for magical power to kill his brother, sister-in-law, and nephew… yet he gets no good magic scenes! We see him light a candle, hold a ball of fire while looking all corpse-ified, and he turns into a big, beefy flaming skull-man at the end.

Really? That was it? You sacrificed everyone you cared about for that? Dude, you totally need to get a refund from the sea witches. I was hoping for the final confrontation between Arthur and Vortigern to be more like a pair of dragons fighting, the Red Dragon versus the White Dragon like in the story of Merlin. (The entire movie is a very loose interpretation of the Arthurian legend, so why not?) It would have been wicked-cool to see Vortigern turn into a red dragon, and either Arthur into a white one or go all Saint George on his now-literally draconian uncle. Or we could have seen them sword-fight as men, but also see their powers struggle against one another in the background like illusionary giants. Unfortunately, the final fight was a bit of a let-down.

However, despite its flaws, I found that I did enjoy watching King Arthur for several reasons:

First, the music. It may not be for everyone, but I enjoyed the traditional Welsh/Celtic sounds with a modern, almost heavy metal twist. It definitely gets your heart pumping, although in the theater it was actually too loud. (Our seats were shaking!)

Second, while the plot had a lot of logic flaws, I did genuinely enjoy the characters. In that way, it reminded me of Thor: The Dark World. That movie also was full of logic fails and plot holes, but I liked watching Loki and Thor so much that it didn’t ruin my enjoyment of the film. King Arthur was like that. Plus, there are many genuinely heart-wrenching and emotional moments that helped the viewer through the less-than-good parts. (However, if you aren’t a fan of fantasy films, this probably won’t be for you.)

Third, they did some interesting cinematic tricks. Their montages were very unique and often did a weird mix between the present, past, and future in a way that advanced the story quickly, but in an amusing way, similar to Ant-Man. (They also got a little 300 with some of the fight scenes, which was a little annoying, but not so egregious as to put me off entirely.)

Fourth, NO ROMANCE! There definitely is potential for something to grow between Arthur and the Mage, but it doesn’t really come up. I was halfway expecting a Romeo and Juliet kind of deal between Arthur and Vortigern’s daughter, but that never materialized. (I felt really bad for her; her entire purpose in the film was to be sacrificed, and her father actually went through with it!)

Fifth, I give the film props for taking the Arthurian legend and making it their own. It’s definitely a fantasy approach rather than a historical one, but plays fast and loose with that as well. I liked the idea of Arthur being sent away by his parents to protect him, Moses-in-a-basket-style, and winds up being raised by the ladies of a brothel. (Mordred being killed within the first minute or two of the film did surprise me; I was expecting him to play a more prominent role. But, like Merlin, he’s gone posthaste.) You can see the influences from the legend, but definitely mixed with other fantasy tropes and their own ideas.

Sixth, and perhaps the most importantly… the film was not pretentious. Let me explain. The moment I saw giant elephants attacking Camelot, I knew what kind of movie I was in for. It didn’t pretend to be anything other than a fun, action-packed fantasy adventure. The characters would be closer to stereotype than fully-fleshed out people. It would have high drama, but in an almost over-exaggerated way.  You just had to sit back, turn off your logic circuits, and go along for the ride. (Now, if I hadn’t had to turn off my logic circuits, then it would have been an objectively better film.) I could tell was what I was in for within the first 30 seconds of the film. And I was okay with that. The film delivered exactly what it promised with very little more or less. It reminded me in a way of the beginning of The Scorpion King, which opens with a gorgeous landscape, pulls back to reveal a guard… and then promptly sends an arrow through his throat. You know right then that this is going to be a hack-n-slash kind of fantasy with more emphasis on action than character. And I appreciate that.

This lack of pretension is something to keep in mind for writing as well. There are many books that are not objectively “good” but they do their job well within their limits. They may rely on tropes, but do so in an entertaining way. Many people read for a sense of safety and familiarity, so there’s nothing wrong with people having a general idea of how you story will go as long as they enjoy the ride. I’ve read plenty of “sugar and popcorn” books. Some are my favorite stories, even if they aren’t literary masterpieces.

In conclusion, King Arthur: Legend of the Sword was not an objectively good movie. It has lots of problems and misses some really great opportunities. But does it deserve the 28% critic rating on Rotten Tomatoes? I don’t think so. (At least the audience reviews gave it a 77%, which, while perhaps still a little high, is a more accurate representation. I’d give it between 40-50%.) So… it’s worth a watch… but you may not want to go to the theater to see it. (Wait until it comes out on DVD and rent it.)

One thought on “Not a Legend, Not a Flop – A Review of King Arthur”