Lately, I’ve done a lot of complaining about not having enough time, or feeling like my time is not my own.  That I am subsumed by other responsibilities and then do not utilize what free time I do have to its fullest capacity.  It’s an old song, one that I think every writer or artist sings throughout their lives.  It is rare to find an artist who is happy with the amount of time they spend on their art.  It always seems to be too much, which leads to burnout, or too little, which leads to intense frustration and despair.

But I’m not going to talk about that today.  You already know about that particular current, so let’s appreciate the scenery for a while.  Let’s look up and see where the river is flowing.  Because despite all of the moaning and groaning about set-backs, I’m surprised to find that, right now, I’m actually pretty happy with myself.

There’s a text I got from my onii-san after I told him that I hadn’t won the Dark Crystal Author Quest contest back in 2013.  I hadn’t honestly expected to win, but I didn’t even make it into the top five.  It was discouraging to receive no tangible reward after putting in so much intense work for so long.  But David reminded me of something important:

“…[Y]ou finished a book  Your first ever.  And you did it right.  Maybe not perfect, but right… You wrote a real book.  It just wasn’t one that fit their idea of what the expanded Dark Crystal universe is going to be.”

This is one of the most encouraging messages I’ve ever received.  It helped ground and reorient me.  Somewhere in those three months of insanity, I forgot how much I’d accomplished.  It’s so easy to slip into the perception that no matter how much you are doing, it isn’t enough, that somehow you can and should be doing more.  Maybe that’s true, maybe it isn’t.  But all too often I forget how much I’ve actually done in the last decade:

–   Two short stories I consider good enough to send out as submissions to online magazines.
–   Two completed fanfics, numbering 130,000 and 43,000 words respectively, with far more reviews and favs than I ever expected.
–   A pair of nearly complete first-draft manuscripts with a third currently under the judicious eye of several beta readers.
–   A bunch of poetry ranging in quality from juvenile to fairly decent.
–   Plus all of the other works-in-progress waiting in the wings.

I say this not to brag, as I honestly don’t feel I have much to brag about.  But because I’m one of those people who continuously punishes themselves for not getting more done, I need to be reminded that I haven’t been just sitting around talking about being a writer.  I am a writer, published or not, because I’ve been writing and continue to write.  (Even if I’m not writing just this moment.)  I can look back at the body of work I have made, even the works in progress, and say, “Yeah.  I made that.  I created that.  Holy crap, I’ve actually have been working!”

Even though I am (fairly) confident that I’m good enough to become a published author, there’s still a little voice that asks, “When?  When is this going to happen?  Is it actually going to happen, or am I just kidding myself?  And even if I do manage to get published, will it be enough?  Will I be recognized?  Will people like my work enough to want more?  Can I make a living, more or less, doing this?  Can I become another Stephen King or George R.R. Martin?”  Despite every book on writing saying that your ultimate goal should be to write for yourself and the rest of the world be damned, it would still be really, really nice to attain some level of recognition and immortality.  There are many authors like Charlotte Brontë or Harper Lee who only wrote one or two books in their lifetime, but those books became classics, universally acknowledged.  Could I do that, even if it’s just within my own narrow field of fantasy rather than in the literary canon as a whole?  Can I be a Ray Bradbury or Ursula K. Le Guin or Andre Norton or Anne McCaffrey?  This question has gnawed at me for years, a level of insecurity and envy and desperate struggle.

Yet somewhere in the last year or so, I stopped caring about it.

Sounds weird, doesn’t it?  How can such a large piece of motivation simply cease to matter?  I’ve tried tempering wild enthusiasm with practicality for years, as I am well aware of the odds against me.  I’ve attempted to convince myself that it’s okay not to be extraordinary and that I can publish without being revolutionary or special or tortured.  And I finally believe it, rather than trying to convince myself that I believe it.  It was like trying to not think about the elephant standing in your living room.  You’ve tried ignoring the elephant for years but because you were trying so hard, you couldn’t stop thinking about it.  Eventually you find yourself going about your day and don’t even realize the elephant is still there until someone else walks in, points, and says, “Hey!  There’s an elephant in the room!”  Then you look up, realize they are right and say, “Why, yes, so there is.”  And then you go back to doing what you’re doing because it needs to be done and the presence of an elephant has no effect on it whatsoever.

This is a hard-won peace.  I wish I could explain exactly how I reached this point.  I wish I could say, “Do this, this, and this, and then everything will be better.”  But I can’t.  It just sort of… happened.  That doesn’t mean I’m giving up writing or publishing.  Believe me, the desire for external acknowledgement is still there.  The fears and doubts are still there.  But it doesn’t torture me the way it used to.  I don’t expect to be an overnight success, riding out of obscurity on the back of a hippogriff like J.K. Rowling.  We know about those kinds of authors because such a thing rarely happens.  One is far more likely to slave away in obscurity for years with little to no compensation, either financially or critically.  (In most cases, even those rare authors that suddenly seem to break onto the scene have already paid their pound of flesh to Time.)

But right now I am perfectly content to be a persistent, workman-like, nose-to-the-grindstone kind of writer.  I know I’m not a genius.  I don’t have the literary flair, tortured soul, interesting life, or poetic turn of phrase requisite to create something truly revolutionary.  I don’t create in a feverish rapture or out of terror, nor do ideas for stories or even scenes come to me easily.  At least, not in a form that can be rendered into a coherent narrative.  I’m not daring or experimental.  And I’m finally okay with that.  So many success stories glorify the risky, bold, and loud that the stable, placid, and quiet are ignored, their talents undervalued.  I think I’m happier to be a steady, hard-working artist.  I’m content with chipping away at the block of inspiration, painstakingly polishing each flake to the best of my ability, then setting it aside and moving on to the next.  I already know I’m going to write for the rest of my life, so I’m not going to worry about what may or may not happen.

I just have to keep going. 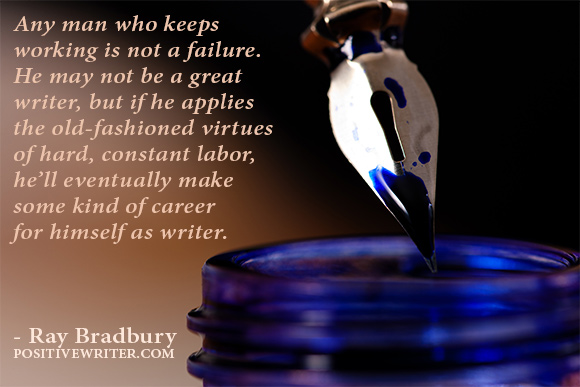